Use stone quarry cutting machine to cut the weathered layer covering the upper part of the stone ore bed horizontally, and then drill the hole. The depth of the hole is about 20~30cm from the cut groove, and then carry out blasting. Cracks due to blasting. The broken stones are transported out by car or other transport machinery.

Before stone quarry cutting machine mines the saw stone, usually along the working line of the mining area from one end to the other end, according to the requirements of the stone saw machine used, a longitudinal trench with a certain depth and width is excavated, and the bottom of the trench is laid with rails completely parallel to the working surface. The two rails should be on the same level, and there should be no excessive error in height, because this will deform the sawn stones, the size will be uneven, it will also increase the wear of stone quarry cutting machine, and it will easily overload the machine. Some disc stone sawing machines also require excavation of transverse trenches. 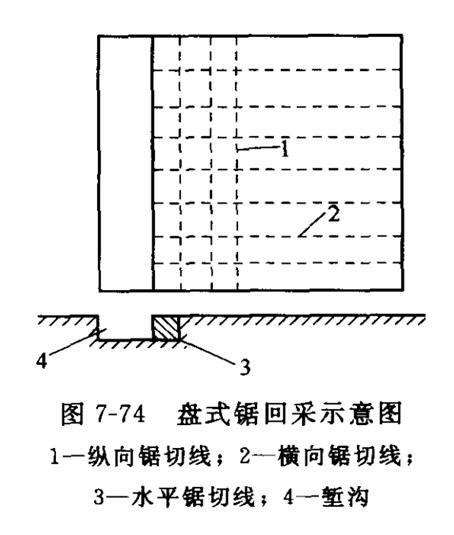 The sawn blocks are hoisted by mast cranes, truck cranes, crawler cranes or cable cranes to trucks for transport.

At present, the most common application is stone quarry cutting machine for unidirectional (vertical) cutting, and there are two types of saw blades and double saw blades. In addition, there is a two-way disc stone saw machine for mining soft rock. The machine is equipped with a vertical saw blade and a horizontal saw blade, which can perform horizontal and vertical sawing at the same time, as shown in Figure 7-75.

After the stone ore body is cut horizontally, it can be cut radially and horizontally to obtain qualified stone.

Applying stone quarry cutting machine to mine stone mines can significantly improve the utilization rate of stone natural resources. Using the sawing mining method is like cutting tofu blocks with a knife, the waste rate can reach more than 90%, and the stone is not broken, the overall quality of the stone is greatly improved, and the gravel, smoke, and dust are less, which is beneficial to environmental protection. The traditional mining method uses thermal cutting combined with explosive blasting, and the finished product rate is generally 30% to 50%. At the same time, a large amount of smoke, dust and gravel are generated, causing environmental pollution.